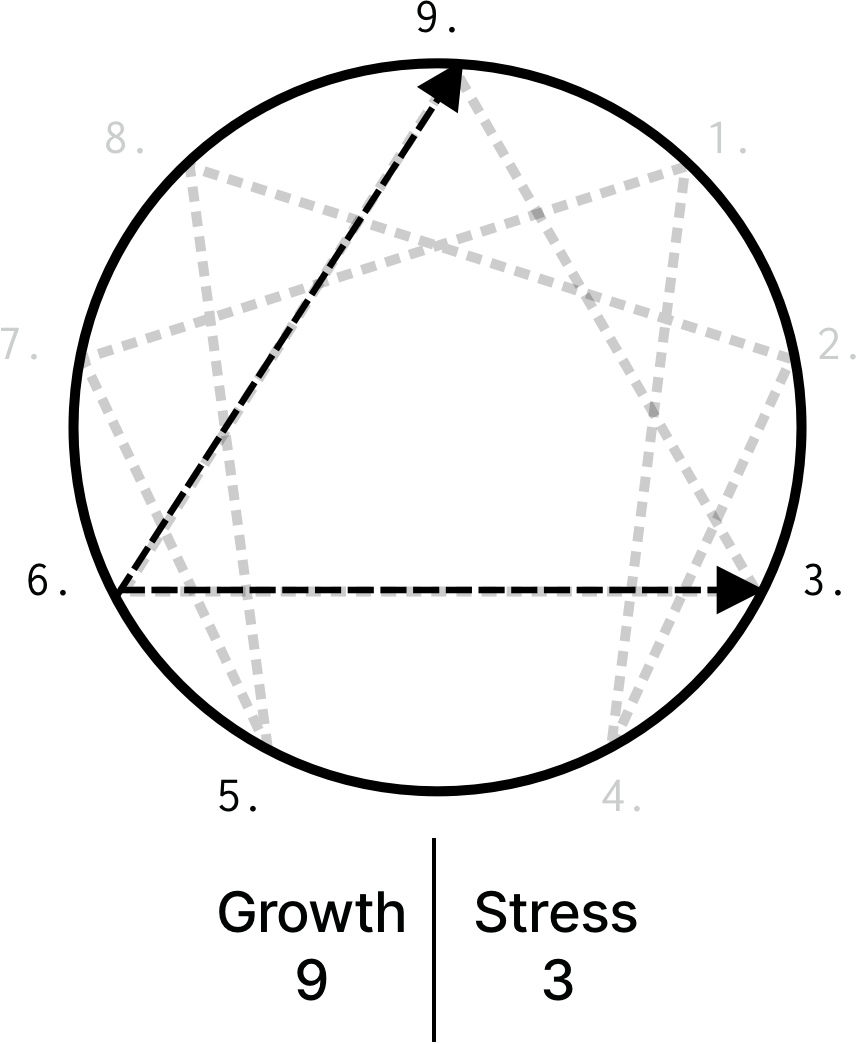 The committed, security-oriented type. Sixes are reliable, hard-working, responsible, and trustworthy. Excellent "troubleshooters," they foresee problems and foster cooperation, but can also become defensive, evasive, and anxious—running on stress while complaining about it. They can be cautious and indecisive, but also reactive, defiant and rebellious. They typically have problems with self-doubt and suspicion. At their Best: internally stable and self-reliant, courageously championing themselves and others.

Key Motivations: Want to have security, to feel supported by others, to have certitude and reassurance, to test the attitudes of others toward them, to fight against anxiety and insecurity.

We have named personality type Six The Loyalist because, of all the personality types, Sixes are the most loyal to their friends and to their beliefs. They will “go down with the ship” and hang on to relationships of all kinds far longer than most other types. Sixes are also loyal to ideas, systems, and beliefs—even to the belief that all ideas or authorities should be questioned or defied. Indeed, not all Sixes go along with the “status quo”: their beliefs may be rebellious and anti-authoritarian, even revolutionary. In any case, they will typically fight for their beliefs more fiercely than they will fight for themselves, and they will defend their community or family more tenaciously than they will defend themselves.

The reason Sixes are so loyal to others is that they do not want to be abandoned and left without support—their Basic Fear. Thus, the central issue for type Six is a failure of self-confidence. Sixes come to believe that they do not possess the internal resources to handle life’s challenges and vagaries alone, and so increasingly rely on structures, allies, beliefs, and supports outside themselves for guidance to survive. If suitable structures do not exist, they will help create and maintain them.

Sixes are the primary type in the Thinking Center, meaning that they have the most trouble contacting their own inner guidance. As a result, they do not have confidence in their own minds and judgments.

This does not mean that they do not think. On the contrary, they think—and worry—a lot! They also tend to fear making important decisions, although at the same time, they resist having anyone else make decisions for them. They want to avoid being controlled, but are also afraid of taking responsibility in a way that might put them “in the line of fire.” (The old Japanese adage that says, “The blade of grass that grows too high gets chopped off” relates to this idea.)

Sixes are always aware of their anxieties and are always looking for ways to construct “social security” bulwarks against them. If Sixes feel that they have sufficient back up, they can move forward with some degree of confidence. But if that crumbles, they become anxious and self-doubting, reawakening their Basic Fear. (“I’m on my own! What am I going to do now?”) A good question for Sixes might therefore be: “When will I know that I have enough security?” Or, to get right to the heart of it, “What is security?” Without Essential inner guidance and the deep sense of support that it brings, Sixes are constantly struggling to find firm ground.

Sixes attempt to build a network of trust over a background of unsteadiness and fear. They are often filled with a nameless anxiety and then try to find or create reasons why. Wanting to feel that there is something solid and clear-cut in their lives, they can become attached to explanations or positions that seem to explain their situation. Because “belief” (trust, faith, convictions, positions) is difficult for Sixes to achieve, and because it is so important to their sense of stability, once they establish a trustworthy belief, they do not easily question it, nor do they want others to do so. The same is true for individuals in a Six’s life: once Sixes feel they can trust someone, they go to great lengths to maintain connections with the person who acts as a sounding board, a mentor, or a regulator for the Six’s emotional reactions and behavior. They therefore do everything in their power to keep their affiliations going. (“If I don’t trust myself, then I have to find something in this world I can trust.”)

Although intelligent and accomplished, Connie still has to wrestle with the self-doubt of her type:

“As my anxiety has come under control, so has my need to ‘check out’ everything with my friends. I used to have to get the nod of approval from several hundred (just joking!) ‘authorities.’ About nearly every decision would involve a council of my friends. I usually would do this one on one: ‘What do you think, Mary?’ ‘If I do this, then that might happen.’ Please make up my mind for me!’…Recently, I’ve narrowed my authorities to just one or two trusted friends, and on occasion, I’ve actually made up my own mind!“

Until they can get in touch with their own inner guidance, Sixes are like a ping-pong ball that is constantly shuttling back and forth between whatever influence is hitting the hardest in any given moment. Because of this reactivity, no matter what we say about Sixes, the opposite is often also as true. They are both strong and weak, fearful and courageous, trusting and distrusting, defenders and provokers, sweet and sour, aggressive and passive, bullies and weaklings, on the defensive and on the offensive, thinkers and doers, group people and soloists, believers and doubters, cooperative and obstructionistic, tender and mean, generous and petty—and on and on. It is the contradictory picture that is the characteristic “fingerprint” of Sixes, the fact that they are a bundle of opposites.

The biggest problem for Sixes is that they try to build safety in the environment without resolving their own emotional insecurities. When they learn to face their anxieties, however, Sixes understand that although the world is always changing and is, by nature uncertain, they can be serene and courageous in any circumstance. And they can attain the greatest gift of all, a sense of peace with themselves despite the uncertainties of life.

Level 1 (At Their Best): Become self-affirming, trusting of self and others, independent yet symbiotically interdependent and cooperative as an equal. Belief in self leads to true courage, positive thinking, leadership, and rich self-expression.

Level 3: Dedicated to individuals and movements in which they deeply believe. Community builders: responsible, reliable, trustworthy. Hard-working and persevering, sacrificing for others, they create stability and security in their world, bringing a cooperative spirit.

Level 4: Start investing their time and energy into whatever they believe will be safe and stable. Organizing and structuring, they look to alliances and authorities for security and continuity. Constantly vigilant, anticipating problems.

Level 5: To resist having more demands made on them, they react against others passive-aggressively. Become evasive, indecisive, cautious, procrastinating, and ambivalent. Are highly reactive, anxious, and negative, giving contradictory, "mixed signals." Internal confusion makes them react unpredictably.

Level 6: To compensate for insecurities, they become sarcastic and belligerent, blaming others for their problems, taking a tough stance toward "outsiders." Highly reactive and defensive, dividing people into friends and enemies, while looking for threats to their own security. Authoritarian while fearful of authority, highly suspicious, yet, conspiratorial, and fear-instilling to silence their own fears.

Level 7: Fearing that they have ruined their security, they become panicky, volatile, and self-disparaging with acute inferiority feelings. Seeing themselves as defenseless, they seek out a stronger authority or belief to resolve all problems. Highly divisive, disparaging and berating others

Level 8: Feeling persecuted, that others are "out to get them," they lash-out and act irrationally, bringing about what they fear. Fanaticism, violence.