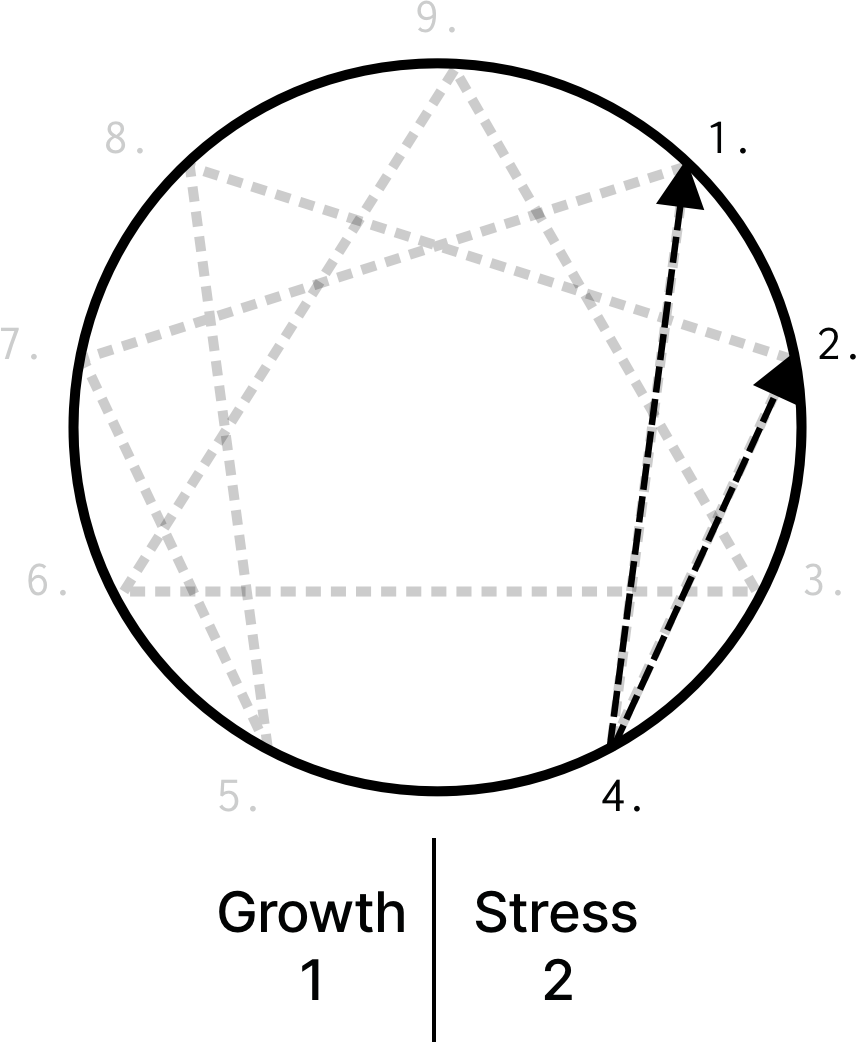 Fours are self-aware, sensitive, and reserved. They are emotionally honest, creative, and personal, but can also be moody and self-conscious. Withholding themselves from others due to feeling vulnerable and defective, they can also feel disdainful and exempt from ordinary ways of living. They typically have problems with melancholy, self-indulgence, and self-pity. At their Best: inspired and highly creative, they are able to renew themselves and transform their experiences.

Key Motivations: Want to express themselves and their individuality, to create and surround themselves with beauty, to maintain certain moods and feelings, to withdraw to protect their self-image, to take care of emotional needs before attending to anything else, to attract a "rescuer."

We have named this type The Individualist because Fours maintain their identity by seeing themselves as fundamentally different from others. Fours feel that they are unlike other human beings, and consequently, that no one can understand them or love them adequately. They often see themselves as uniquely talented, possessing special, one-of-a-kind gifts, but also as uniquely disadvantaged or flawed. More than any other type, Fours are acutely aware of and focused on their personal differences and deficiencies.

Healthy Fours are honest with themselves: they own all of their feelings and can look at their motives, contradictions, and emotional conflicts without denying or whitewashing them. They may not necessarily like what they discover, but they do not try to rationalize their states, nor do they try to hide them from themselves or others. They are not afraid to see themselves “warts and all.” Healthy Fours are willing to reveal highly personal and potentially shameful things about themselves because they are determined to understand the truth of their experience—so that they can discover who they are and come to terms with their emotional history. This ability also enables Fours to endure suffering with a quiet strength. Their familiarity with their own darker nature makes it easier for them to process painful experiences that might overwhelm other types.

Nevertheless, Fours often report that they feel they are missing something in themselves, although they may have difficulty identifying exactly what that “something” is. Is it will power? Social ease? Self-confidence? Emotional tranquility?—all of which they see in others, seemingly in abundance. Given time and sufficient perspective, Fours generally recognize that they are unsure about aspects of their self-image—their personality or ego-structure itself. They feel that they lack a clear and stable identity, particularly a social persona that they feel comfortable with.

While it is true that Fours often feel different from others, they do not really want to be alone. They may feel socially awkward or self-conscious, but they deeply wish to connect with people who understand them and their feelings. The “romantics” of the Enneagram, they long for someone to come into their lives and appreciate the secret self that they have privately nurtured and hidden from the world. If, over time, such validation remains out of reach, Fours begin to build their identity around how unlike everyone else they are. The outsider therefore comforts herself by becoming an insistent individualist: everything must be done on her own, in her own way, on her own terms. Fours’ mantra becomes “I am myself. Nobody understands me. I am different and special,” while they secretly wish they could enjoy the easiness and confidence that others seem to enjoy.

Fours typically have problems with a negative self-image and chronically low self-esteem. They attempt to compensate for this by cultivating a Fantasy Self—an idealized self-image which is built up primarily in their imaginations. A Four we know shared with us that he spent most of his spare time listening to classical music while fantasizing about being a great concert pianist—à la Vladimir Horowitz. Unfortunately, his commitment to practicing fell far short of his fantasized self-image, and he was often embarrassed when people asked him to play for them. His actual abilities, while not poor, became sources of shame.

In the course of their lives, Fours may try several different identities on for size, basing them on styles, preferences, or qualities they find attractive in others. But underneath the surface, they still feel uncertain about who they really are. The problem is that they base their identity largely on their feelings. When Fours look inward they see a kaleidoscopic, ever-shifting pattern of emotional reactions. Indeed, Fours accurately perceive a truth about human nature—that it is dynamic and ever changing. But because they want to create a stable, reliable identity from their emotions, they attempt to cultivate only certain feelings while rejecting others. Some feelings are seen as “me,” while others are “not me.” By attempting to hold on to specific moods and express others, Fours believe that they are being true to themselves.

One of the biggest challenges Fours face is learning to let go of feelings from the past; they tend to nurse wounds and hold onto negative feelings about those who have hurt them. Indeed, Fours can become so attached to longing and disappointment that they are unable to recognize the many treasures in their lives.

Leigh is a working mother who has struggled with these difficult feelings for many years.

“I collapse when I am out in the world. I have had a trail of relationship disasters. I have hated my sister’s goodness—and hated goodness in general. I went years without joy in my life, just pretending to smile because real smiles would not come to me. I have had a constant longing for whatever I cannot have. My longings can never become fulfilled because I now realize that I am attached to ‘the longing’ and not to any specific end result.”

There is a Sufi story that relates to this about an old dog that had been badly abused and was near starvation. One day, the dog found a bone, carried it to a safe spot, and started gnawing away. The dog was so hungry that it chewed on the bone for a long time and got every last bit of nourishment that it could out of it. After some time, a kind old man noticed the dog and its pathetic scrap and began quietly setting food out for it. But the poor hound was so attached to its bone that it refused to let go of it and soon starved to death.

Fours are in the same predicament. As long as they believe that there is something fundamentally wrong with them, they cannot allow themselves to experience or enjoy their many good qualities. To acknowledge their good qualities would be to lose their sense of identity (as a suffering victim) and to be without a relatively consistent personal identity (their Basic Fear). Fours grow by learning to see that much of their story is not true—or at least it is not true any more. The old feelings begin to fall away once they stop telling themselves their old tale: it is irrelevant to who they are right now.

Level 1 (At Their Best): Profoundly creative, expressing the personal and the universal, possibly in a work of art. Inspired, self-renewing and regenerating: able to transform all their experiences into something valuable: self-creative.

Level 2: Self-aware, introspective, on the "search for self," aware of feelings and inner impulses. Sensitive and intuitive both to self and others: gentle, tactful, compassionate.

Level 3: Highly personal, individualistic, "true to self." Self-revealing, emotionally honest, humane. Ironic view of self and life: can be serious and funny, vulnerable and emotionally strong.

Level 5: To stay in touch with feelings, they interiorize everything, taking everything personally, but become self-absorbed and introverted, moody and hypersensitive, shy and self-conscious, unable to be spontaneous or to "get out of themselves." Stay withdrawn to protect their self-image and to buy time to sort out feelings.

Level 6: Gradually think that they are different from others, and feel that they are exempt from living as everyone else does. They become melancholy dreamers, disdainful, decadent, and sensual, living in a fantasy world. Self-pity and envy of others leads to self-indulgence, and to becoming increasingly impractical, unproductive, effete, and precious.

Level 7: When dreams fail, become self-inhibiting and angry at self, depressed and alienated from self and others, blocked and emotionally paralyzed. Ashamed of self, fatigued and unable to function.

Level 8: Tormented by delusional self-contempt, self-reproaches, self-hatred, and morbid thoughts: everything is a source of torment. Blaming others, they drive away anyone who tries to help them.

Level 9: Despairing, feel hopeless and become self-destructive, possibly abusing alcohol or drugs to escape. In the extreme: emotional breakdown or suicide is likely. Generally corresponds to the Avoidant, Depressive, and Narcissistic personality disorders.