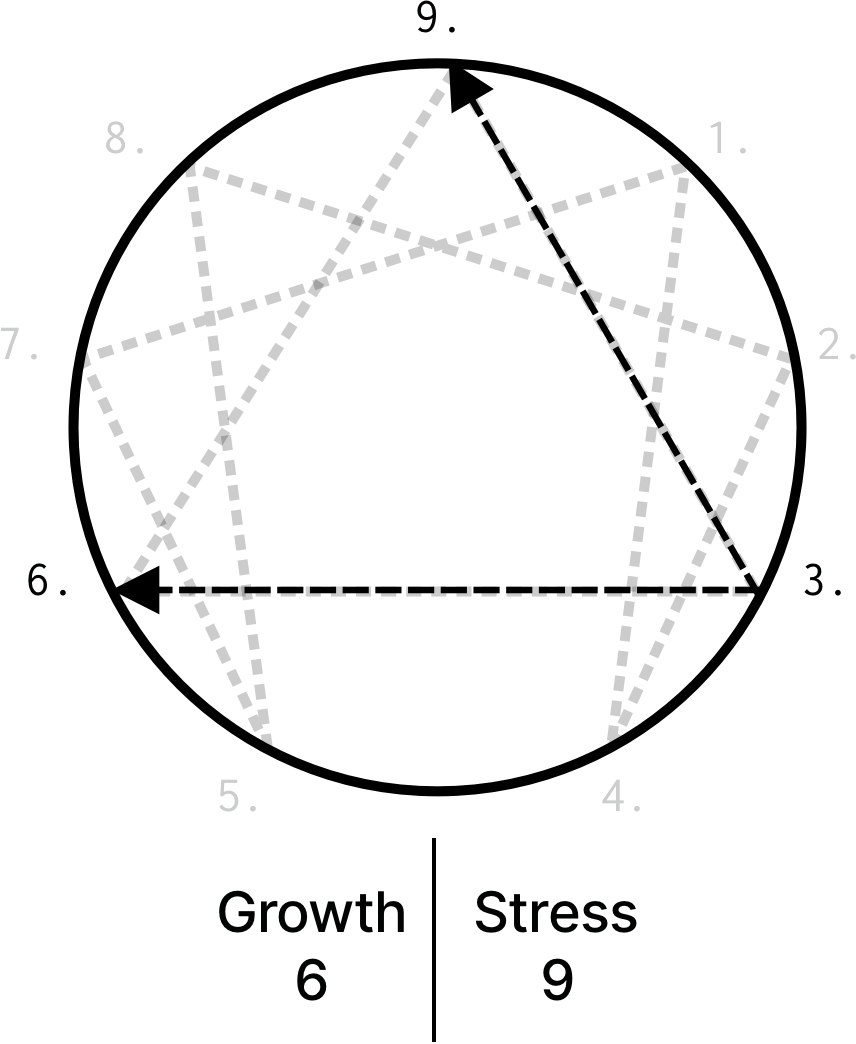 Threes are self-assured, attractive, and charming. Ambitious, competent, and energetic, they can also be status-conscious and highly driven for advancement. They are diplomatic and poised, but can also be overly concerned with their image and what others think of them. They typically have problems with workaholism and competitiveness. ‍

At Their Best: self-accepting, authentic, everything they seem to be—role models who inspire others.

Key Motivations: Want to be affirmed, to distinguish themselves from others, to have attention, to be admired, and to impress others.

The Achiever has an innate passion to achieve and gain recognition for their achievements. Because of this passion, the Achiever often accomplishing what they set out to do. The drive to achieve typically makes them adaptable and high-energy.

2. Basic Fear - Being A Failure

The basic fear of the Enneagram Type Three is failure and worthlessness. - They may hold a subconscious belief that in order to be worthy, they must succeed, or at least be perceived as successful.- Often times because of this fear, they are driven and love to set and accomplish goals.

The most basic desire of the Type Three is to feel valued and accepted. - They tend to seek accomplishment and admiration, usually expressing this by setting big goals and doing what it takes to succeed in order to earn validation or praise from those around them.- People who identify as the Type 3 often adapt to fit different settings very naturally, which can may lead to playing a character rather than being themselves.

We have named personality type Three The Achiever because when they are healthy, Threes really can and do achieve great things in the world. They are the "stars" of human nature, and people often look up to them because of their graciousness and personal accomplishments. Healthy Threes know how good it feels to develop themselves and contribute their abilities to the world, and also enjoy motivating others to greater personal achievements than others thought they were capable of. They are usually well regarded and popular among their peers, the type of person who is frequently voted “class president" or “home coming queen” because people feel they want to be associated with this kind of person who acts as a stand-in for them. Healthy Threes embody the best in a culture, and others are able to see their hopes and dreams mirrored in them.

Threes are often successful and well liked because, of all the types, they most believe in themselves and in developing their talents and capacities. Threes act as living “role models” and paragons because of their extraordinary embodiment of socially valued qualities. Healthy Threes know that they are worth the effort it takes to be “the best that they can be.” Their success at doing so inspires others to invest in their own self-development.

Threes want to make sure their lives are a success, however that is defined by their family, their culture, and their social sphere. In some families, success means having a lot of money, a grand house, a new, expensive car, and other status symbols. Others value ideas, and success to them means distinguishing oneself in academic or scientific worlds. Success in other circles might mean becoming famous as an actor, or model, or writer, or as a public figure of some kind, perhaps as a politician. A religious family might encourage a child to become a minister, priest, or rabbi since these professions have status in their community and in the eyes of the family. No matter how success is defined, Threes will try to become somebody noteworthy in their family and their community. They will not be a “nobody.”

To this end, Threes learn to perform in ways that will garner them praise and positive attention. As children, they learned to recognize the activities that were valued by their parents or peers, and put their energies into excelling in those activities. Threes also learned how to cultivate and develop whatever about them is attractive or potentially impressive.

Eve is a successful business-woman:

“My mother trained me to perform. I was about three when I performed my first solo in front of the church congregation. I got a lot of positive strokes for that and went on to perform in front of audiences throughout high school, either through music or debate. To this day, something mystical happens to me when I get in front of an audience. I ‘turn it on.’ I am called on frequently as a public speaker and some of my professional colleagues say that they hate following me on the program because I am such a hard act to follow!”

Everyone needs attention, encouragement, and the affirmation of their value in order to thrive, and Threes are the type which most exemplifies this universal human need. Threes want success not so much for the things that success will buy (like Sevens), or for the power and feeling of independence that it will bring (like Eights). They want success because they are afraid of disappearing into a chasm of emptiness and worthlessness: without the increased attention and feeling of accomplishment which success usually brings, Threes fear that they are nobody and have no value.

The problem is that, in the headlong rush to achieve whatever they believe will make them more valuable, Threes can become so alienated from themselves that they no longer know what they truly want, or what their real feelings or interests are. In this state, they are easy prey to self–deception, deceit, and falseness of all kinds. Thus, the deeper problem is that their search for a way to be of value increasingly takes them further away from their own Essential Self with its core of real value. From their earliest years, as Threes become dependent on receiving attention from others and in pursuing the values that others reward, they gradually lose touch with themselves. Step by step, their own inner core, their “heart’s desire,” is left behind until they no longer recognize it.

Thus, while they are the primary type in the Feeling Center, Threes, interestingly, are not known as “feeling” people; rather, they are people of action and achievement. It is as if they “put their feelings in a box” so that they can get ahead with what they want to achieve. Threes have come to believe that emotions get in the way of their performance, so they substitute thinking and practical action for feelings.

Jarvis is a well-educated and accomplished business professional; he sees that this pattern developed in him at an early age.

“I had no conscious awareness of this at the time, but when I was a child, I wasn’t allowed to have my feelings at all. They counted for nothing in the framework of my stepfather’s concept of what it took to be successful. I developed the habit of denying my feelings and instead focused on performing and getting good marks in school.”

Threes report that when they realize to what extent they have adapted their lives to the expectations of others, the question arises, “Well, then, what do I want?” They often simply did not know; it was not a question that had ever come up before. Thus, the fundamental dilemma of Threes is that they have not been allowed to be who they really are and to manifest their own authentic qualities. At a young age, they got the message that they were not allowed to have feelings and be themselves: they must, in effect, be someone else to be accepted. To some degree, all of the personality types have been sent the same message, but because of their particular background and makeup, Threes not only heard it, they began to live by it. The attention they received by performing in a certain way was their oxygen, and they needed it to breathe. Unfortunately, it came at a high price.

Marie, a skilled therapist describes the contradiction—and the pressure—of this orientation.

“For most of my life, people always noticed when I was involved in any kind of activity, and they have usually looked to me for some sort of direction. This has been a two-edged sword because while I wanted to be noticed and approved, the burden was that I had to be perfect—and that was tough.”

(from The Enneagram Institute)

Level 1 (At Their Best): Self-accepting, inner-directed, and authentic, everything they seem to be. Modest and charitable, self-deprecatory humor and a fullness of heart emerge. Gentle and benevolent.

Level 2: Self-assured, energetic, and competent with high self-esteem: they believe in themselves and their own value. Adaptable, desirable, charming, and gracious.

Level 3: Ambitious to improve themselves, to be "the best they can be"—often become outstanding, a human ideal, embodying widely admired cultural qualities. Highly effective: others are motivated to be like them in some positive way.

Level 4: Highly concerned with their performance, doing their job well, constantly driving self to achieve goals as if self-worth depends on it. Terrified of failure. Compare self with others in search for status and success. Become careerists, social climbers, invested in exclusivity and being the "best."

Level 5: Become image-conscious, highly concerned with how they are perceived. Begin to package themselves according to the expectations of others and what they need to do to be successful. Pragmatic and efficient, but also premeditated, losing touch with their own feelings beneath a smooth facade. Problems with intimacy, credibility, and "phoniness" emerge.

Level 6: Want to impress others with their superiority: constantly promoting themselves, making themselves sound better than they really are. Narcissistic, with grandiose, inflated notions about themselves and their talents. Exhibitionistic and seductive, as if saying "Look at me!" Arrogance and contempt for others is a defense against feeling jealous of others and their success.

Level 7: Fearing failure and humiliation, they can be exploitative and opportunistic, covetous of the success of others, and willing to do "whatever it takes" to preserve the illusion of their superiority.

Level 8: Devious and deceptive so that their mistakes and wrongdoings will not be exposed. Untrustworthy, maliciously betraying or sabotaging people to triumph over them. Delusionally jealous of others

Level 9: Become vindictive, attempting to ruin others' happiness. Relentless, obsessive about destroying whatever reminds them of their own shortcomings and failures. Psychopathic behavior. Generally corresponds to the Narcissistic Personality Disorder.